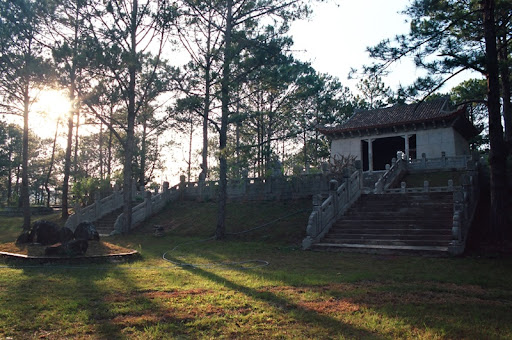 Nguyen Huu Hao, which is a very rich man, native of Go Cong (now the province of Tien Giang). He was married to Le Thi Binh, Le Phat Dat his daughter, one of the richest men of that time in Vietnam. In 1914, Nguyen Huu Hao wife gave birth to a daughter, named Nguyen Thi Lan.

The mausoleum with bold oriental characteristic, the shape looks like the mausoleums of the kings of the Nguyen dynasty in Hue, the old capital, with a gate with 4 large pillars, on top decorated with two lotus flowers and the two dogs clam stylized.

After the middle gate is the alley leads to the mausoleum,including 36 stone steps and resting steps (each time step from 9 to 13 of cement stone). Before entering the mausoleum, there's a large yard with railing surrounding it.

The entire mausoleum is built of brick plastered, stone, roof casting of reinforced concrete and wide-spreading canopy. La font style orchestra poured flowers, roofing tile royal-me. In the interior there are two green rectangle stone tombs about 30cm high, a green stone incense is placed in the middle is where worship.