Domaine de Marie Church, also known as Mai Anh church is a group of buildings including a chapel and convent two blocks of Sisters of Charity of St.Vincent with a total area of 12ha, located on Ngo Quyen – away from center of Da Lat city about 1 km to the southwest. 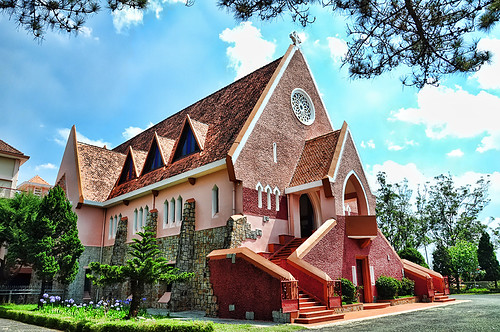 The church was built in 1930 until 1943 in the style of 17th century Europe. The church has the harmonious combination between Western-style architecture with folk architecture of ethnic minorities in the Central Highlands.

Behind the church is the grave of her Decoux, to fulfill your wishes and to remember her acknowledgment of her, whose work in helping build the church.

Behind the church is an architectural complex designed in modern style with three blocks of three floors of the Sisters of Charity, in the surrounding garden, whitewashing the walls yellow, red tiled roofs.