Dalat cathedral was designed by "model" of the Roman Catholic church in Europe, representing of Roman architecture.Dalat Cathedral is now officially started at 9am Sunday July 19, 1931 by Bishop Colomban Dreyer (Apostolic Delegate in Indochina and Thailand) to lay the first stone. Project was built by the priest Celeste Nicolas, pastor at the time. The cathedral was building in 11 years, from 1932 to 1942.

Looking from the above, the church has cross shape with length of 65m, 14m wide and 47m high of bell tower. With that height, the bell tower of the cathedral can be seen everywhere in the city. The main door of the church towards the mountains Langbiang. 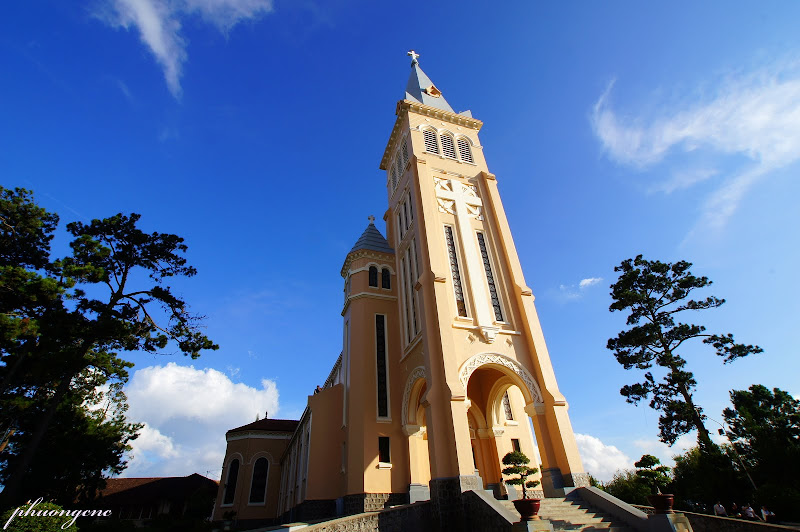 The interior consists of three space sanctuary: a large space in the middle and two small spaces on either side.The columns in the interior column system simulation with the classical form spontaneously. Both surface and vertical symmetry are designed strictly classical.

The bell tower rising, lines, details on the facade completely original adaptation of European models. Round arch windows, sturdy lines, definitive, everything were design with harmony.
The roof of the cathedral with 70 attic decorated stained glass manufactured by Louis Balmet factory in Grenoble (France), making the scene more magical sanctuary.

Bearing walls built with bricks thick 30 - 40cm. The interior wall is attached to the bas size 1m x 0.8 m, made of cement and iron (by sculptor Xuan Thi shown). Particularly, the outer walls are painted pink, as more religious solemnity of a religious architecture.

On the cross has a statue of rooster (27m above ground) with light-alloy hollow inside is coated with a special class of chemicals the 0.66 m long, 0.58 m high orbit around a shaft bearings for wind direction . Rooster can be a symbol of France (Coq Gaulois: Made Rooster Gaulle), may be a symbol of penance, as recounted in the New Testament Jesus rebuked Peter (one of 12 his disciples): "Tonight the rooster crowed,..".

Lightning rod, round base of the rooster-and cross were repaired or replaced several times. The rooster on a silver wheel swivel shows the direction of the wind.